Human Trafficking and Immigration Reform: The Refugee Crisis At Our Southern Border


This morning as I drove in there were two pre-teen boys standing on the overpass holding signs. As I slowed to read their messages, which were obviously written in their own somewhat sloppy script, one said, "Secure Our Border" and of course the other, "Impeach Obama".

To say this nation is weary of politicking when it comes to our immigration policies is an extreme understatement. The Twitter and Facebook feeds, the news headlines and op-ed columns are full of rants and pleas for resolution. No matter if you fall on the humanitarian side of the fence or the national security side, everyone agrees the status quo is unacceptable and the whole process is deeply flawed and broken. 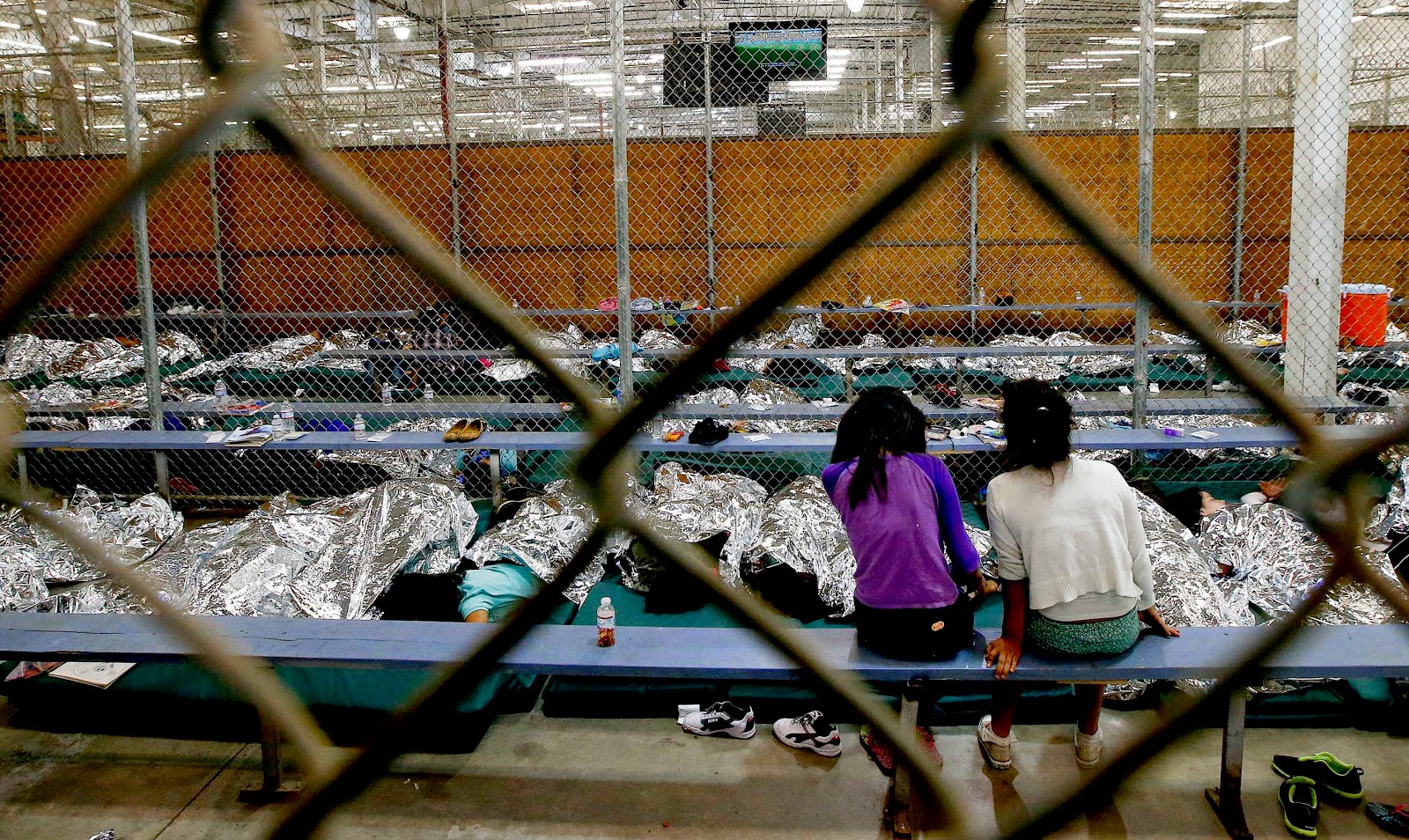 There are no simple answers, there is no easy way out. There is only the critical need to come together for the sake of human dignity and to protect the most vulnerable among us. Here are the facts and the stories of those most at risk.

Homeland security reports there are 12,000,000 unauthorized immigrants in the USA. But according to border patrol agents this is closer to 20 million. “The more likely figure is 18-20 million and rising daily,” says Zack Taylor, chairman of the National Association of Former Border Patrol Officers, Inc. 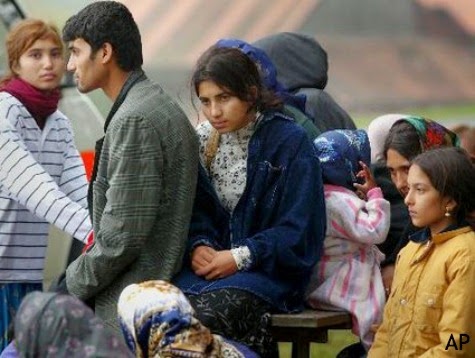 Whether it is 12 million or 30 million as some have claimed is not the issue. The reality is those are huge numbers that represent families living in limbo. And if the number does approach the 30 million mark, well then our sense of urgency must match it. 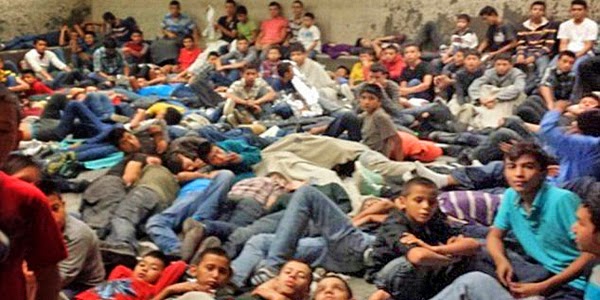 That's 5.5 million potentially vulnerable children as a conservative estimate based on the number 12 million for unauthorized immigrants so that number could be two or three times higher. And the number of children immigrating alone is spiking exponentially, especially from Central America. The graphic below from The Economist. 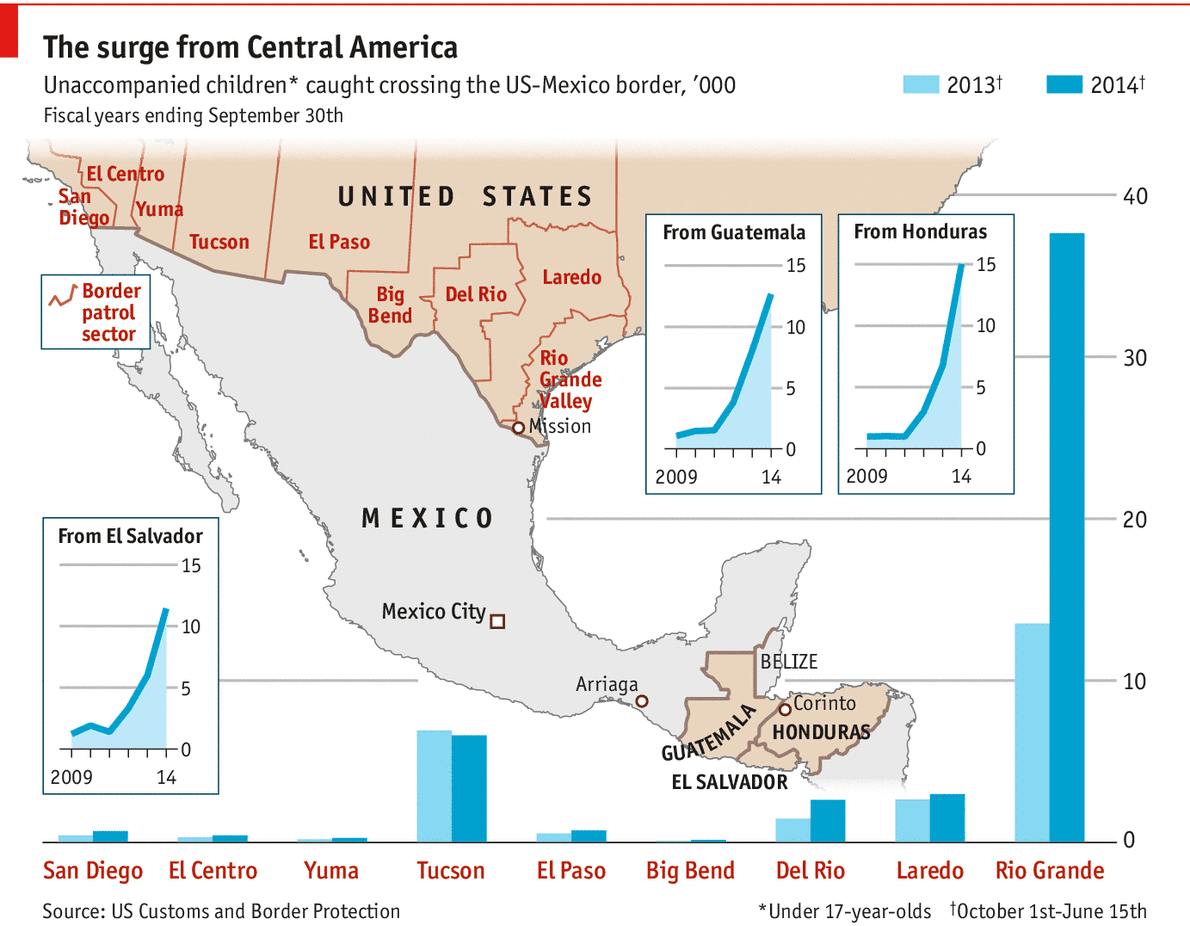 Why the recent spike? What are these children fleeing from? The answers are deeply disturbing. This article from Vox is a must read to understand the current state of many Central American countries. The article reports "the murder rate in Honduras in 2012 was a whopping 30 percent higher than UN estimates of the civilian casualty rate at the height of the Iraq war. In other words, all three Central American countries were, statistically speaking, twice as dangerous for civilians as Iraq was."

This extreme violence is due to pandemic gang activity and children are uniquely vulnerable to gang violence. "The street gangs known as "maras" — M-18 and Mara Salvatrucha, or MS-13 — target kids for forced recruitment, usually in their early teenage years, but sometimes as young as kindergarten. They also forcibly recruit girls as "girlfriends," a euphemistic term for a non-consensual relationship that involves rape by one or more gang members. If children defy the gang's authority by refusing its demands, the punishment is harsh: rape, kidnapping, or murder."

Below, with well over 60,000 members, Mara Salvatrucha (aka MS-13) is easily one of the largest and most feared criminal gangs in the world. 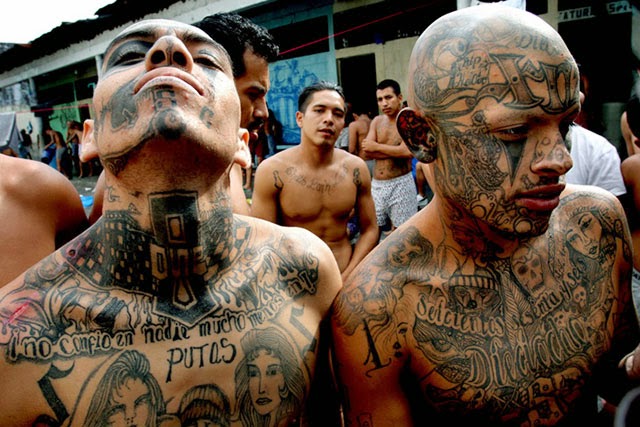 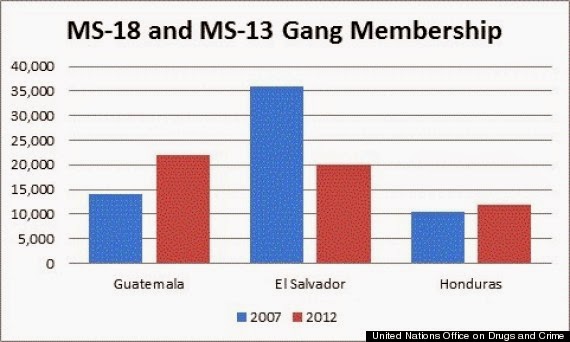 Two more articles that outline the terror that these children live in: from The Guardian, and The New York Times. The stories in these articles are graphic. Especially the NYT piece. But they are the true accounts of what these kids are running from. Please read them and let them crush your heart.

1. Sex trafficking: young girls are brought into the US and forced into prostitution or are sold over and over again as sex slaves. A high profile case in Houston where Federal prosecutors described a trafficking ring that was selling young Mexican girls, "[they]fixed the prices for sex with the underage girls based on how young and pretty they were. The victims were kept locked in a room over the bar and regularly beaten by pimps and clients.The prices for the sex acts ranged from $65 for 15 minutes to up to $500 per hour." A quick Google search reveals endless stories of young girls tricked, coerced, or kidnapped and brought to the US as sex slaves. A 12 year old forced to service 25 men a day in a field under a tarp is one of many stories revealing the need to act now with relentless determination.

2. Forced labor: There are thousands of documented cases of forced labor in the US agriculture industry. From the tomato farms and citrus groves of Florida to the livestock ranches of Colorado workers are lured to the US with false promises and then coerced into slave labor. Many of the types of labor exploitation trafficking victims endure are touched on in this report from Free The Slaves.

According to antislavery.org  "Enslaved workers are taken to labor camps where they face brutality and a near-total loss of control over their lives. As many as 12-16 [workers] may be housed in one cramped, run-down trailer, kept under constant surveillance by employers using a variety of methods, including armed guards. Some endure a constant barrage of verbal abuse along with threats of violence and death to themselves and their families back home. In the most severe cases, employers use public beatings, pistol-whippings, and shootings to make an example of those trying to escape. In addition, women in forced labor are sometimes faced with sexual harassment and even violent sexual assault."

When workers are undocumented they are afraid to call police when abused. They fear retaliation, deportation, incarceration, or worse. And yet we continue to demand cheaper and cheaper goods in America. We continue to claim that these men and woman are doing the jobs Americans will not do (unauthorized immigrants make up 25% of farm workers (not including temporary workers)) making them vital to our economy. We continue to profit from this cheap, sometimes free labor and because of this we the people have been silent too long.

My heart here is to outline a possible solution which makes the very best of a very bad situation. One that brings ultimate resolution and safety for the vulnerable caught in this border-less labyrinth. I feel any reform bill must have these three points included to be just, effective, and compassionate.

First: We must close our borders. We must do it to keep the children from being sold into sexual slavery here. We must so we will know who is here, know they are citizens and make sure they have full rights. So they are not scared to seek justice or medical care. So they can better themselves through education and the many opportunities this incredible nation affords its people. And going forward we must enforce the law. A society who protects the weakest among its people is one who is governed by compassion and the rule of law. We must at the same time always and perpetually have open doors to all those who are fleeing persecution and abuse.This is what has always made America amazing, it is what I would love my country to be known for again. We cannot solve all the worlds problems. We cannot end all the abuses that send people fleeing. But when those that are desperate for freedom come to American shores we can say to them, "you are welcome here, you are safe now, you are family."

Second: We must give amnesty to those who are already here. We have benefited from their hard work and cheap labor. Those who have fake social security numbers have paid into a retirement they will never see. Money the US government is glad to have and use. We must fast track these unauthorized immigrants to citizenship. Not superseding the ones who have immigrated legally but with an urgency that admits that what we have is not an immigration crisis but a refugee one. Once these immigrants are in our system then those few that are dangerous felons can be deported.

Third: We must take political expediency and opportunism out of the equation. Whether we suspend the right of those unauthorized immigrants receiving amnesty to vote for an election cycle or two; this is a small price to pay for not giving political parties a voter base they can leverage. Our response to this humanitarian crisis must be apolitical and dignified. We must restore the humanity to this deeply troubled situation. This is not about what is best for America anymore. This is about what is right, what is ethical, what is good. We the people have eaten the fruits picked by bruised and broken hands. We the people have worn the cotton picked by beaten and bloodied backs. We the people with bellies full while those who have labored without pay in our fields have gone hungry. No more.

We are a nation of immigrants who once proudly, compassionately proclaimed:

"Give me your tired, your poor,
Your huddled masses yearning to breathe free,
The wretched refuse of your teeming shore.
Send these, the homeless, tempest-tost to me,


I lift my lamp beside the golden door!"

Have we become a nation of closed and hardened hearts? Have we long forgotten where we came from? Are we willing to do less for the scared and battered children of the world then we will for our own children? Are we willing to allow this refugee crisis to continue unabated?

I hope our collective response is a loud, resounding "No! Not on our watch, not now, not ever!"

Please contact your congressperson. You can do so here. Tell them what we have in America is a refugee crisis and you will not allow it to be politicized. Tell them you want reform now. If you agree with the some or all of the three points above then email them to your senators and representatives along with your ideas. Let them know your America is one of compassion. Let them know your vote is for human dignity and always for safe harbor of the persecuted. Please sign this petition. And thank you for caring about justice and opening your hearts with compassion.


Please be a voice for the voiceless.