Today is International Women's Day (IWD). It has been celebrated every year on March 9th for almost a century now. And celebrate women we should. As the Chinese proverb says "Women hold up half the sky". But now, more than ever, there is a war on women. All over the world women suffer the worst of atrocities and exploitations, often solely because of their gender and societal relegation to second class or classless citizens. But woman are invaluable. They are the heart of every society, the tenderness that makes this life worth living. That is not to say they are weak, that they are fragile, for in most countries all over the world women outwork men. And much of that work, invisible when it comes to wages and recognition, is a matter of survival for them and their families. 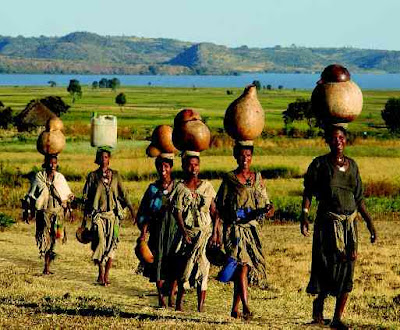 The weight of water that women in Africa and Asia carry on their heads is commonly 40lbs, and the walk can be up to ten miles as water sources become polluted or over taxed women spend more and more time, an estimated 200 million work hours annually, merely to maintain their family's water supply. Girls as young as ten help carry the burden with their mothers but as the distance to water increases so does the number of school days missed until the girls fall so far behind they drop out.


Also, according to waterproject.org, "Women are at a high risk for infections due to their frequent contact with unsanitary water. Trachoma, a water-washed disease that can lead to blindness, is transmitted through contaminated water where women gather. Women and girls collecting water are also susceptible to diarrhea, hepatitis A, and leptospirosis, a bacterial infection from water that is tainted by animal urine."


And yet women in these cultures rarely if ever complain. The carry on in such grace and noble character, always putting their family first, always going without so that others can have more.


According to most statistics one out of every three women will suffer a violent, usually sexually motivated attack in their life. The UN estimates the worst nation in the world for violence against women is Zambia where 60% of women have suffered such attacks. All over the world millions of women also experience a different sort of violence, often as children, the culturally and religiously sanctioned horror of forced genital mutilation. The countries of Guinea and Egypt have the highest rate at over 90%.


The statistics are unending, the brutalities unimaginable, and they must be brought to light so that the rest of the world wakes to defend our mothers, sisters, wives, girlfriends and especially are daughters. But today we wanted to take a few moments to highlight some of the amazing women that hold up more than half of their sky. Woman who not only survived horrific abuses or gender based injustice, but who fought back, who sought change and who are making the world safer for our daughters. 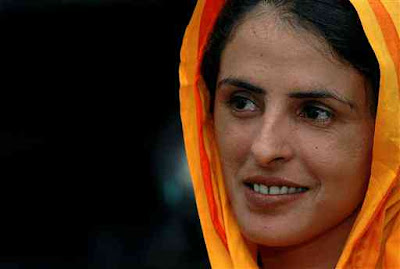 "Mukhtar Mai (above) was a victim of gang rape in Pakistan. She took this tragic and horrible situation, gathered her strength and went to authorities putting her rapists in jail. She received compensation money from the government, which she did not use for herself, but instead opened a rape crisis hotline, and opened up a girls school. Mai has received countless death threats, attacks on her school, her local village, and against her family. She remains vocal, stands strong by her school, and refuses to close it down along with the hotline she opened. Mai was awarded Bravest Woman of the Year in 2005, and praised by the UN, having been honored her for her incredible activism, heroism, and bravery." (Deborah Cole) 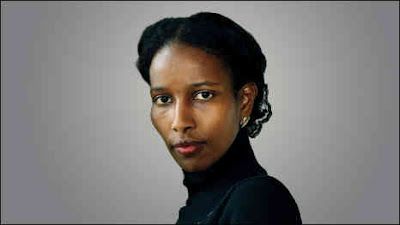 "Ayyan Hirsi Ali (above) is best known for publicly denouncing violence against women in Islam. Fleeing an arranged marriage in Somalia in the nineties, she sought amnesty in the Netherlands. There she learned Dutch, English, received her BA degree in Political Science, and became a member of Dutch Parliament. She left the Netherlands when Theo Van Gogh, her co producer for the documentary “Submission”, was killed by an extremist for helping her make the movie.  She speaks out today all over the world, and refuses to “submit” to the death threats and multiple attempts on her life by extremists and terrorists that try to silence her." (Deborah Cole) 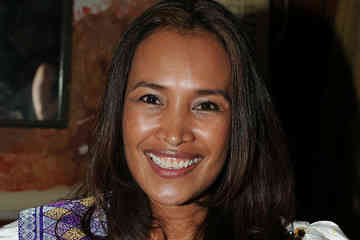 "Somaly Mam (above) was born into a tribal minority family in the Mondulkiri province of Cambodia. She began life in extreme poverty. With limited options as a severely marginalized ethnic group, and living in unimaginable despair, her family often resorted to desperate means to survive. Somaly was sold into sexual slavery by a man who posed as her grandfather. Forced to work in a brothel along with other children, Somaly was brutally tortured and raped on a daily basis. One night, she was made to watch as her best friend was viciously murdered. Fearing she would meet that same fate, Somaly heroically escaped her captors and set about building a new life for herself. She vowed never to forget those left behind and has since dedicated her life to saving victims and empowering survivors.


In 1996, Somaly established a Cambodian NGO called AFESIP. Under Somaly's leadership, AFESIP employs a holistic approach that ensures victims not only escape their plight, but have the emotional and economic strength to face the future with hope. With the launch of the Somaly Mam Foundation in 2007, Somaly has established a funding vehicle to support anti-trafficking organizations and to provide victims and survivors with a platform from which their voices can be heard around the world."  (somaly.org) 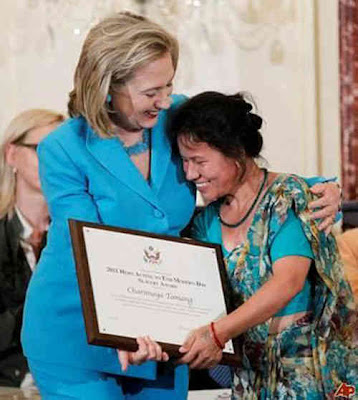 In December of last year when the American government named the years international ‘heroes’ for their efforts to End Modern-Day Slavery almost all of the ten people who received the award were renowned lawyers and bureaucrats. Only Charimaya Tamang (above) from Nepal knew what it was like to be a slave.

Charimaya comes from Sindhupalchok, a remote district of Nepal. In 1994 her neighbors sold her to a brothel in Kamathipura, the red light area of Mumbai. She was just 16.


“I was cutting grass in the jungle that day. The four people came to me and asked me if I wanted to go with them in town. I said 'No'. They forced me and put something in my mouth. It must be drugs. I was unconscious after that. When I woke up I was already in India. I cried, begged for help. I looked out of the window of the taxi and cried for help. But no one helped me. I tried to escape but nothing worked.”


Charimaya was forced to work in the brothel for 22 months. She says she was mentally dead. “I was made naked for the first time in my life. After that I had no more personal life. I had to do what they wanted me to do. That place is a hell, where women breathe, but they are not alive. I tried to hang myself from the ceiling, while no others were around. I used my shawl as rope. But unfortunately, the shawl frayed and I fell on the ground. I couldn't die.”


Indian Police raided the brothel in February 1996 and Charimaya was released with 400 other women under the age of 18. 200 of them were Nepalese. They were all placed in a transit home in India and six months later they were returned to Nepal with the help of seven different Non-Governmental organizations.


Charimaya travelled home with joy and happiness. But she was shocked by how she was greeted. “The courtyard was full. Everyone was yelling at me. "You are sinful. Why did you come back? Why didn't you die or commit suicide? You will spoil our village.” All those sentences are still roaming in my ears. Some shouted, beat me and kicked me out of the village. I couldn't stay there for two hours. I was hurt, but I can understand that's what they learnt.”


Her story is not isolated one in Nepal...most trafficking victims are treated the same. But Charimaya was not shamed into silence. For the first time in Nepal she filed a criminal case against her neighbors who abducted her. Four people were jailed for 10 years. Charimaya with other trafficking survivors formed the group Shakti Samuha to help others.


“We have been helping trafficking victims to file the case into the police. We have been visiting door to door of rural villages to raise the awareness against trafficking. Now all women’s organizations and campaigns have come at one place to end the human trafficking.” And now victims themselves are demanding justice. In 2009 174 traffickers were convicted and 119 cases tried in court.


Whenever Charimaya shows off her award her eyes sparkle. She has a dream to end trafficking in Nepal. She says “Trafficking is expanding day by day. Now women are not only taken to Mumbai or in India. Now traffickers are taking them to other countries too. Even women are sold to an illegal prostitution center in Kathmandu. I want to see all these victims have justice. And I will fight for them.” " (Rajan Parajuli of Asia Calling)

As always from all of us at Conspiracy Of Hope, thank you for being a voice for the voiceless and on this day of celebrating women let us all renew our resolve to fight for justice and freedom for the amazing women of our world.