As I checked the days headlines for stories related to these topics it seemed to me there were 5 times as many stories of exploitation each more grotesque, more horrifying than the next. I hope it is because of the concerted effort to expose these evils, but if anything it shows that the work to be done is great and that it will take all of us being deeply committed and tireless, to end these evils in our lifetime. Thank you for educating yourself and caring about justice. (Click the bold headings to go to the full articles.)


Witchcraft: The demonic realities of human trafficking: African and South American girls flee their captors and live to tell of their harrowing escapes and the sadistic rituals that their traffickers tried to use to enslave the young girl's minds.


Human Sacrifice in Uganda: 'In Uganda, traffickers buy and sell children to use their genitals, heads, and blood for ritual sacrifice. The U.S. Department of States recently reported 9000 children missing in Uganda over the last four years. Traffickers transport children both inside Uganda and to other countries for use in ritual sacrifices. In 2008, police arrested a witchdoctor couple and a real estate mogul, Godfrey Kajubi, for trafficking 12 year old Joseph for ritual sacrifice. According to the police, Kajubi promised the witchdoctor couple $4021 in exchange for the heads of four children, which he planned to use for ritual.'


Forced child labor in Gold mines and young girls raped for good luck: In Ganzourgou Province new gold veins are found and thousands of young children are exploited in these mines. Boys 'dig, crush, and carry rocks, facing great risks on a daily basis. The young girls are responsible for carrying water, crushing stones and rebuilding. Some of them look after their younger siblings while their mothers are at work. Owing to various superstitions linking sex to finding gold, the little girls also become victims of sexual exploitation or prostitution on the sites.'

Woman trades sexual favors with a child for painkillers: Below,  Debra Annmarie Blackmon, 25, and Tony Marcel Hammond, 23, face sex trafficking and other charges. The couple even gave the child marijuana to help her complete the act. 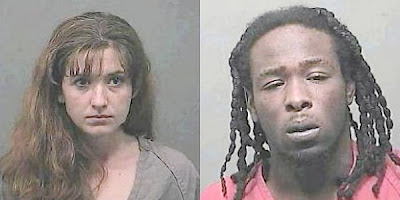 Selling girls on the web, Nicholas Kristof takes on Backpage.com: The classified ads for The Village Voice have been used all to often to sexually exploit minors. The magazine claims it is a matter of censorship vs. free speech. Pulitzer Prize winning author Kristof takes them to task.


The world's 5 most dangerous countries for women: Incredible resource from Rueters as published on trust.org that highlights the most dangerous places in the world to be born female. The map below. Please click the link to read about the most egregious crimes against woman. From the 1152 women and girls raped everyday in the Congo, to the 70-80% of young women in Afghanistan in forced marriages. 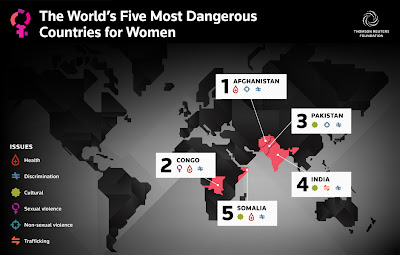 Other heartbreaking statistics from the Rueter's chart:


1000 honor killing in Pakistan every year.


50 million. The deficit of women in India to men. Mass infanticide of baby girls has eradicated a whole generation of women equal to the population of Texas, Florida and Tennessee combined.


From all of us at Conspiracy Of Hope. Thank you for being a voice for the voiceless.