A Home For The Holidays.


In India there are 30 million child laborers with some estimates approaching 100 million, the highest concentration in the province of Andhra Pradesh, where almost 20% of the school age population are working. A very large percentage of these children, perhaps upwards of 40% find themselves in the very worst forms of child labor including child prostitution and bonded slave labor. As always there are none more at risk for this type of exploitation than orphans and street children. Nestled near the Andrha Pradesh border is Rayagada, just south of Orissa. It was in this small town that Narges Ashtari of the Prishan Foundation met 40 little orphans that would change her life forever. Narges has dedicated her life to keeping kids such as these out of harm's way. We spoke with her about her current project and the beautiful girls of Assist Orphanage she is helping. 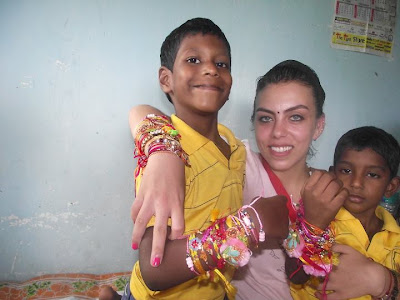 Narges K. Ashtari and the sons of Assist Orphanage's caretakers Abraham and Jainy.

Tell us about the children you are fundraising for.


They are amazing! They are all little princesses with so much love and affection to give. They have all been through the worst things imaginable. They have seen and felt things that no one deserves to have felt and I had such an amazing connection with all of them. I would wake every morning cuddled up between all of them. I loved it and I loved every single second I spent with them. They allowed me to get so close to them and leaving them was SO incredibly difficult. I left promising them I would come back and build them their own home. I am more determined than ever. I send them letters every week and they send me drawings and little cards. My backpack has more letters and cards in it than clothes or anything else. 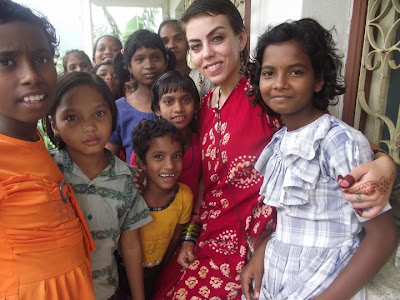 Some of the 40 little princesses at Assist Orphanage. 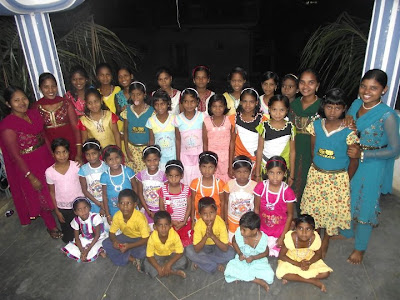 All girls, wow. Is there one little princess that stands out?


Gosh, it's so difficult to just tell you about one because they are all so special and have their own unique personalities. Without a doubt the little girl I spent almost all of my time with was Emi. She was the youngest in the orphanage so I felt like she needed more love and care. She's the little girl on my back (below). Every morning, around 6am, she would come and stroke my hair until I woke up. So gently and lovingly. She is 4 years old and lost her parents to Malaria, I don't think she remembers them and thinks of Abraham and Jainy, the orphanage caretakers, as her parents. I love them so much for that. For allowing her to call them mummy and daddy and not making her feel anything less than a daughter. After 2 or 3 days of living with her I became aunty Narges. Kids at that age have that CUTTEEEE voice and every time she wanted a bit of attention she would come and find me, pinch my leg, say aunty Narges in that adorable voice and then she'd be sorted for a couple of hours. We'd play until it was bedtime. 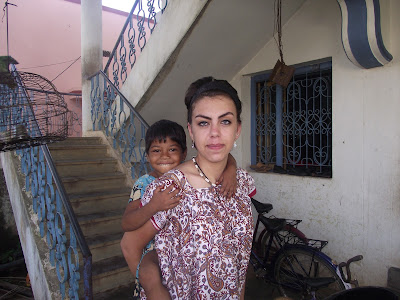 
Her parents died when she was a baby and the villagers had pretty much kept her until they found Assist orphanage. Abraham had told me that when she first came to the orphanage she would often speak about her village people, her little friends so I wanted to take her back to her village. I think that she understood that she hadn't said goodbye to them properly and you could see that sometimes she would just be thinking so deeply about something. Me, Abraham and Emi got on a motorbike and after 3/4 hours got to her village. It was tiny, dirty, not a place for children. It just made me realize how much Abraham and Jainy changed this girls life. She would have still been in this area, miserable, not going to school... She had her new dress and shoes on and she walked with us through that village with the biggest smile on her face. 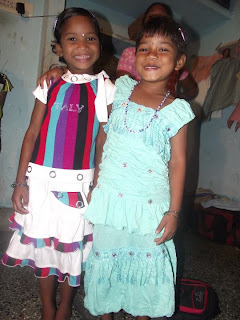 Emi in her new dress (above), and Emi and Abbi goofin' below. 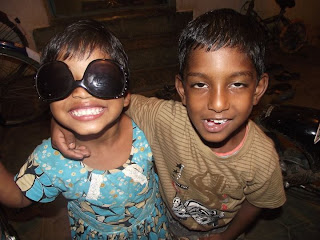 After coming back from her village I could tell she was so different. She wouldn't wake up as much during the night, wouldn't be so lost in thought sometimes. It was the closure she needed. She understood everything. I miss Emi so much now! Ahhhhh!!


What is the current situation of Assist Orphanage and the children?

When I was there the landlord of the home they had lived in for over 10 years told them they had 2 weeks to leave because his daughter was giving birth and he wanted her to live there. We literally knocked on every single door in Rayagada after that to see if they had space or an empty room for the girls to move into. Finally we found a 2 bedroom apartment. But that was SO small and so expensive to fit all the children into. We convinced the landlord of the orphanage to let half of the girls stay on the first floor of the house and we moved the other remaining 20 into the new home. Thankfully he agreed. So now, half of the girls are living on the first floor of their previous orphanage while the top is occupied by the landlords daughter and husband, and the remaining girls are in a small apartment 20mins walk away. Right now we are paying rent for 2 homes, money we could be using for other things! 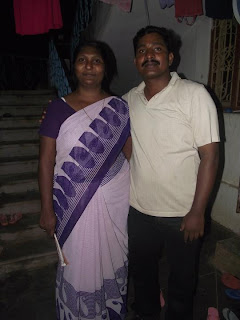 Abraham and Jainy, their new orphanage will be more than a house for orphaned children, it is a home, it is family.


The orphanage was given a piece of land 5 years ago by a charity but just never had the funds to build anything on the land. Abraham never even told me about this piece of land because he thought it would never be possible to build anything and said he didn’t want to burden me with it. It was either the day I was leaving or the day before that he mentioned it to me. I rounded the girls up, took them to piece of land, took some photos of it with them and I promised them I would raise the money in 6-12 months… 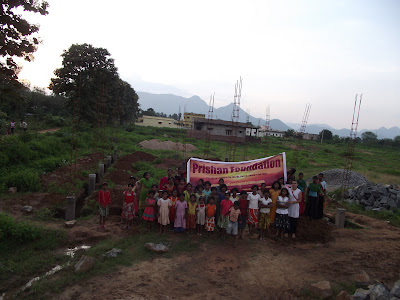 Do you talk to your princesses while you are back West?


I call the children all the time telling them how much we have raised, I see myself as one of them but the one who is lucky enough to be able to go to the West and raise the money.  I really do believe we are all the same, no matter where we are from or what we look like. At the end of the day we all just want to be happy right!?

How much will it cost to build the orphanage?


20 lakh rupees. This is the cost of building permission, to dig 200m underground to pump up fresh water, to have an electricity line, labour charges and materials. All of it together comes to $43,000. If not a little more.

Who will oversee the building?


I will oversee the whole thing. It will take 3 months to build, I will be there for the entire process.

How much have you raised so far?

Last year you raised over 7000 dollars by shaving your head, what types of fundraisers are you doing now?

We do bake sales every Sunday morning in downtown Vancouver. I spend the night before, my Saturday nights in style, wrapping 200+ cookies in plastic wrap. I wouldn’t change that for the world. I enjoy it because I know how many donations we get from each one, plus, those ‘broken’ cookies aren't going to eat themselves! I know that sometimes I may upset the people around me because I do not spend as much time with them but I feel like if they were my genuine friends they should understand. These children are my life now. Last year there was a lovely girl who baked cookies for us, it is just too much work, it takes so much time, time that we could spend doing other fundraisers so I buy the cookies this year. Superstore has an amazing deal, 20 cookies for $5.99 so I buy 6 or 7 packs, if it’s going to be a sunny day then I will buy more… 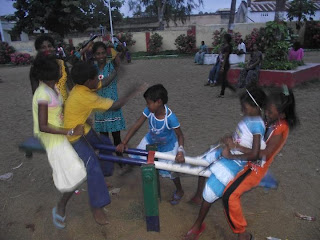 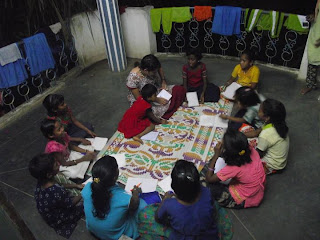 
Right now I have around 6 people helping every week. We have a great time trying to sell them, we joke around with people as much as we can. We stand at a great location as well, right behind a busy Art Gallery, in between two busy roads and next to a road always packed with cars… sometimes we even stop the cars and sell them cookies! We raise around $400 every time. I am trying to find more volunteers so we can start doing it on Saturdays too! I love the bake sales, we get to meet so many people who share their stories with us. We meet many people who have been to India and have fallen in love with the country just as much as I have.


Also I sell jewelry that I purchased while in India. A lovely friend of mine donated around 100 brand new t-shirts for me to sell. I babysit as often as I can, ‘babysitting children for children’ the parents make a donation on my website every time. What ever time I have left during the day I spend it by sending out as many emails as possible to who ever I feel could help us in the fundraising, every business, charity, humanitarian worker or celebrity you can think of, I have emailed!

Where do you see yourself in 5 years?

In 5 years I want to have already lived in India for a couple of years, surrounded by children, a few perhaps adopted by me and be working to fund raise. Instead of having to come back to the west once in a while to raise money I want to stay there and find a way to do it there. Find a way to support myself and the children… That’s my dream.


This holiday season, when we have so much to be thankful for, so many reasons to give let's remember the 40 girls in Rayagada. Let's give them a home for the holidays. Conspiracy Of Hope is donating all of our funds raised until Prishan Foundation reaches their goal for the building project. Below is a short video highlighting that campaign. Please donate with boundless generosity. And as always, thank you for being a voice for the voiceless and Happy Holidays!