Amadou and the Taste of Chocolate. 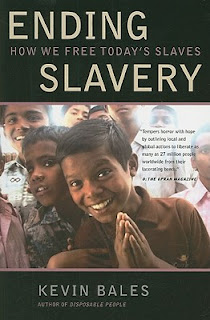 In Kevin Bales's book Ending Slavery he tells the stories of young boys from Mali enslaved on cocoa farms on Africa's Ivory Coast. These boys, barely into their teens, worked dawn to dusk collecting the cocoa pods in the oppressive heat. Weak from hunger and malnutrition they would stumble under the heavy bags of pods and then be beaten viciously. If they tried to escape they were beaten for days on end or killed. One boy sent back to work before his wounds could heal was only able to survive because the maggots on his back ate the infection from the wounds. When rescuers found them the boys' eyes were hollow and their bodies skeletal. In one heartbreaking conversation a young survivor gave a shocking admonition. Bales recounts the exchange this way. 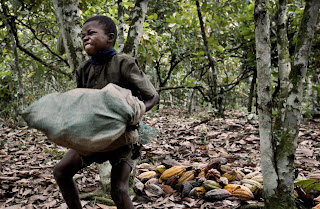 Kate (a film maker working with Kevin) asked a young man Amadou how he felt about his five and a half years in slavery. Amadou replied with remarkable sensitivity: "When I think of all that suffering, it hurts my heart deeply. I want to say so much, but I just can't find the words." Kate then explained to him that cocoa was used to make chocolate, a sweet food that people love, but Amadou said he never knew this and had never tasted it. When he was asked if he had anything to say to the millions of people who eat chocolate every day, Amadou replied, "If I had to say something to them, it would not be nice words. They enjoy something I suffered to make; I worked hard for them, but saw no benefit. They are eating my flesh."

Chocolate is not alone in being tainted with slave labor. Almost everything we eat, drive, wear, and even our houses have components that have some amount of slave labor in their production chain. If Gerard Manley Hopkins' words may be borrowed and reapplied "...all is seared with trade; bleared, smeared with toil."


The Tariff Act of 1930 states that "all goods...produced or manufactured wholly or in part by...forced labor...shall not be entitled to entry [into the United States] and importation is hereby prohibited."


We are eating their flesh.
Posted by Mark Langham at 11:02 AM